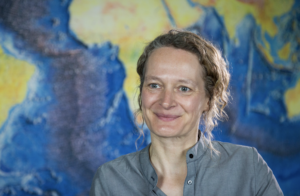 Bärbel Hönisch grew up in Germany and studied at the Universities of Bielefeld and Bremen, as well as the Alfred-Wegener-Institute for Polar and Marine Research in Bremerhaven. She received her Diploma in Biology in 1999 and her PhD in Natural Sciences in 2002. After moving to the US, she held academic positions at the Lamont-Doherty Earth Observatory of Columbia University, the City University of New York at Queens College, the State University of New York in Stony Brook, and Bremen University. She joined the faculty of the Department of Earth and Environmental Sciences at Columbia University in 2007. Bärbel Hönisch is interested in the effect of global carbon cycle perturbations on climate and the oceans, in particular past variations of seawater acidity and its relation to atmospheric CO2. Over the past 5 years she has led a consortium of paleo-CO2 proxy experts to compile, vet and modernize published paleo-CO2 estimates over the Cenozoic.